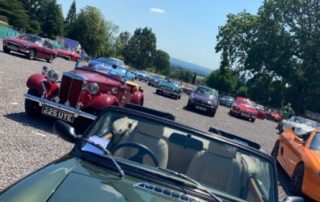 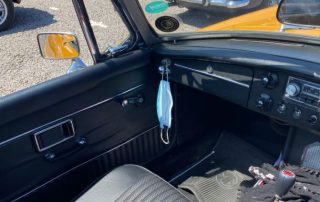 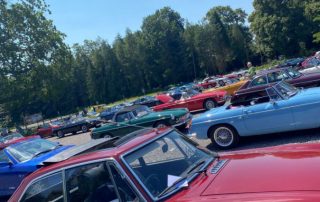 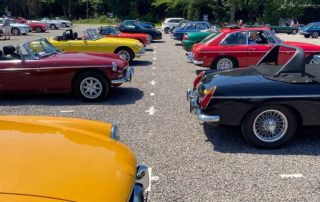 Since our last SURREY RUN in 2019 we had been planning the next event that eventually took place on the 18th July this year.   With the welfare of our members and participants as a priority, it became very obvious that the 2020 date would have to be delayed when the COVID-19 continued to be a serious issue.  At that time many other events were being cancelled, but with some negotiation we were able to simply postpone ours for twelve months. During these difficult times, vital charity funds that many organisations work hard to raise, suffered very badly.   We were fortunate however that our new proposed date was close to a time when the Government restrictions were due to be relaxed and everyone could see a light at the end of what has been a very dark tunnel.  The result of this was that we were overwhelmed with applications and despite over 220 cars registering we had to declare some weeks prior to the event that we were fully booked.  As the days drew closer it also became obvious that the weather was going to be glorious.

With the COVID precautions still in place and in order to keep everyone safe we did have to make some changes to the usual procedure for signing on at Bocketts Farm. In order to respect the current guidelines, the cars arrived in batches at timed intervals.  Our marshals then directed them to their respective colour coded “signing on” stations.   Having made themselves comfortable and taken the opportunity of the traditional breakfast at the farm, our Chairman Eric waved each car off at the start for a two hour scenic journey of about 62 miles through the picturesque Surrey and Sussex countryside.  The cars were then received by our reception team led by Joy and Ray Reeves at Leonardslee Lakes and Gardens, our end venue for this year.   Our new sponsor Richmond MG was also in attendance at both the beginning and end with Ian Reynolds, their Sales Manager, claiming that he had a most enjoyable day.  I was pleased that we were also joined by Nigel Knowles, the Regional Secretary, responsible for all the Home Counties Areas.

Following a phased start at Bocketts Farm it was great to see all the MGs displayed together but appropriately spaced at Leonardslee in the dedicated parking area.  It was also good to see that everyone had managed to find some grass and more importantly, shade on such a very hot day, in order to enjoy their traditional MG picnic.  With lunch over it was then time to explore the 200 acre gardens and lakes that had recently been restored by the new owners since they acquired the site in 2017. There was certainly plenty more to see including wallabies, deer in the park, a vineyard and a most incredible dolls house that takes up a complete building.

At the start of the Run, each driver was given a Prize Draw ticket containing their unique run number to be handed in as they passed the finish post.   When everyone had arrived Wendy Mitchell representing Leonardslee management, conducted a prize draw with three winners.

First prize winner was Marek Pogorzelski, from Camberley in Surrey, number 164 who won a store voucher for £25.

Second to be selected was Allen Pratt, number 39 from Bookham in Surrey, winning a voucher for £15.

Third prize went to Bob Malston, number 214 from Kingston upon Thames, Surrey who won a voucher for £10.

It has been very testing during these uncertain times but my thanks go to the Epsom membership for all their hard work in making this event possible.  Once again, we have received many favorable comments regarding how everyone enjoyed their day with us.    On behalf of the Epsom Area, I would like to thank the MG Owner’s Club at HQ for their continued support.  I would also like to thank Bocketts Farm and Leonardslee Lakes and Gardens for providing the start and end points of the route.   We are grateful to Richmond MG at Guildford who were our major sponsor this year and to all our friends and MG enthusiasts for their interest and involvement with the Epsom Area MGOC.  My thanks go to everyone who joined us for this event.  The Epsom Area has always had a commitment to fundraising for local deserving charities.   By taking part in the Surrey Run, you have provided valuable support in helping us achieve our goals for yet another year.   I do hope that you enjoyed the day and I look forward to seeing you all again next July for the SURREY RUN 2022.